First Husband:  John I, Count of Holland
Children: none 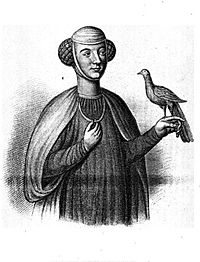 In October 1321, Bartholomew’s wife, Margaret de Clare, refused to admit Queen Isabella to her husband’s castle at Leeds. The king made an assault on the castle; eventually capturing it.

After the castle was captured, Kind Edward II seized and imprisoned Margaret and their five children, and then civil war broke out. Bartholomew (who was not at the castle when it fell) fled warrants for his arrest, and eventually joined the Lancaster forces.

On 16 March 1322, the Earl of Lancaster and his allies were defeated at the Battle of Boroughbridge, and Bartholomew was arrested. He was tried and sentenced to high treason, the punishment for which was a gruesome death: to be hanged, drawn and quartered. Following his punishment, Bartholomew’s head was displayed on Burgh Gate at Canterbury.

Margaret de Clare was the first recorded woman imprisoned in the Tower of London.

Queen Isabella arrived at the castle during this time, and Margaret, who was already on hostile terms with the Queen, refused her entry. The Queen tried to enter the castle anyway, and Margaret ordered the castle guard to attack her entourage. King Edward II lay siege to the castle in retaliation. The castle surrendered after five days of siege, and Margaret was taken prisoner, along with her five children.

This event quickly precipitated a civil war – in fact, historians have speculated that Isabella’s initial attempt to stay at the castle was a deliberate provocation to create an excuse for the king to wage war on the Contrarians.

Bartholomew fought with the Earl of Lancaster against the king, and was eventually arrested and sentenced to death in Canterbury. Margaret and her children spent a year in the tower.

Elizabeth de Badlesmere was married to her first husband Sir Edmund Mortimer when she was three years old, in what was essentially a real estate contract between Elizabeth’s father Bartholomew, and Sir Edmund’s father Roger Mortimer, future consort of Queen Isabella.

At age eight, Elizabeth spent a year with her mother and siblings as prisoners in the Tower of London.

Although her marriage was not consummated for many years, Elizabeth’s first child was born when she was just fifteen years old.

When Roger Mortimer was hanged for assuming royal powers, his estates were forfeited to the crown and therefore his son Edmund did not inherit the earldom. Edmund died a year later, and Elizabeth was left with a few estates in the Welsh Marches.

Three years after her first husband’s death, Elizabeth married William de Bohun, 1st Earl of Northampton. Their marriage was arranged as an attempt to make peace between the Mortimer and Bohun families – although ironically in spite of this feud, Elizabeth’s first and second husbands were third cousins, both having been descended from Enguerrand de Fiennes, which meant that Elizabeth and William first had to solicit a papal dispensation for their marriage.

Elizabeth de Badlesmere died on 8 June 1356, at age 43. She was buried in Black Friars Priory, London.

Sir Robert Bourchier served on a diplomatic mission to France in 1327, and was returned as a member of parliament for the county of Essex. In 1334, he was chief justice of the king’s bench in Ireland. He joined the invasion of Scotland in 1335, and may have been present at the battle of Cadsant in 1337. He traveled with the Earl of Northampton on Edward III’s expedition to Flanders in 1338, and upon his return, Edward III made him Lord Chancellor of England. In 1342, he commanded a contingent in Brittany, and is recorded as being at the battle of Crecy in 1346. He died in 1349, likely from the Black Death.